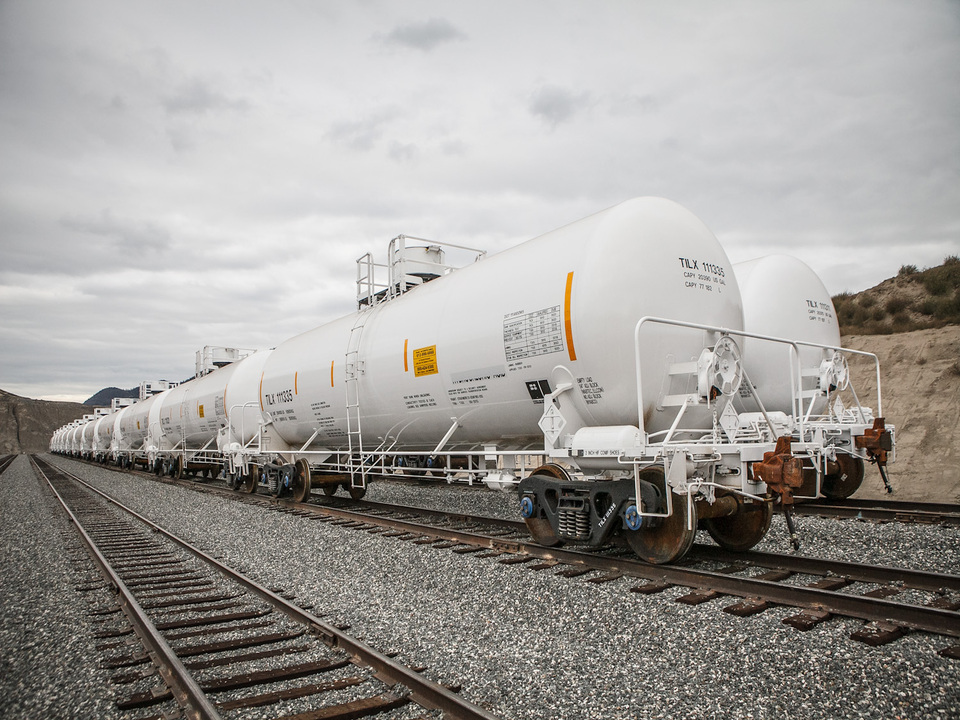 Coming soon to a B.C. port near you: more container cargo in bigger ships.

That’s the upbeat script the province’s ports and container terminals are following for their infrastructure expansion plans.

But have they got their investment priorities right?

The biggest roll of the dice on that front is also the biggest source of controversy for the Vancouver Fraser Port Authority (VFPA): the proposed three-berth Terminal 2 expansion at Delta’s Roberts Bank.

The $2 billion project, which has been in the planning stages since 2006 and is undergoing federal environmental review, would add approximately 2.4 million 20-foot-equivalent units (TEUs) to the Port of Vancouver’s (PoV) annual container cargo-handling capacity.

Terminal 2 is also the cornerstone of a port container cargo future that’s backdropped by a global seaborne trade landscape in which huge container ships will require extremely efficient loading and unloading at high-capacity ports.

But projected increases in container cargo to B.C.’s West Coast are not guaranteed, nor is the optimistic growth in transpacific container trade.

Global seaborne trade increased 2.6% to reach 10.3 billion tonnes in 2016, but it was a difficult year for container carriers, and analysts are forecasting brighter days ahead.

According to shipping data company Alphaliner, global container throughput growth is on track to exceed 6% in 2017.

Drewry also estimated 2017 profit in the sector would be around US$6 billion compared with 2016 when container shipping lines collectively lost US$3.5 billion.

Simon Heaney, Drewry’s senior manager of container research, added that 2018 could be as lucrative for container carriers as 2010, when the sector’s profit exceeded US$20 billion.

Drewry had previously pegged 2017 growth at around 2.1% and transpacific trade growth at approximately 3.2% in 2016 and the same or slightly less for 2017.

However, Terminal 2 opponents argue that, even if optimistic cargo outlooks are accurate, the port doesn’t need to invest $2 billion in a new container terminal because the PoV’s current infrastructure, augmented by plans to increase capacity and efficiency, can handle projected transpacific container traffic growth.

Much of that opposition is environmental. But questions have also been raised by terminal operators and others in the international shipping sector.

Some analysts argue that other infrastructure projects should take priority because B.C.’s container-handling capacity should be considered as a whole.

For example, the 2008 Asia-Pacific Gateway and Corridor Initiative report commissioned by David Emerson when he was Canada’s minister of international trade recommended that Prince Rupert container capacity be expanded before more investments are made in Vancouver.

Capacity in the northern port, the report’s authors noted, “can be expanded relatively quickly and … will allow time for Vancouver to develop solutions to its congestion.”

Dubai-based DP World (FRA:3DW) unveiled its first major expansion of the terminal at the end of August. The two-year, $200 million project increases Fairview’s annual capacity to 1.35 million TEUs from 776,412. It also provides the terminal with the technology to service the larger vessels being deployed in container fleets in a sector where consolidation has resulted in three major alliances having 77% of global container capacity and 92% of east-west container trade.

DP World, the world’s third-largest container terminal operator, wants to increase its West Coast Canada cargo-handling capacity to four million TEUs by 2022. Sixty per cent of that would go through Prince Rupert as part of a third Fairview expansion that would raise its annual capacity to between two million and 2.5 million TEUs.

DP World also plans to invest $350 million to increase the capacity of its Centerm container terminal in Vancouver to 1.5 million TEUs from the current 900,000.

But when asked at the August 29 Fairview terminal expansion event if DP World would be interested in managing Terminal 2, Maksim Mihic, DP World Vancouver’s general manager, said no.

Its $300 million Deltaport Intermodal Yard Reconfiguration project scheduled to be in operation in 2018’s second quarter will increase the terminal’s rail capacity 50% and expand its annual capacity 33% to 2.4 million TEUs. GCT is also investing $160 million in infrastructure improvements at its 900,000-TEU Vanterm container terminal that will boost its capacity by approximately 20%.

However, while GCT also operates major container terminals in New York and New Jersey, it is not in the running to manage Terminal 2.

In a September 22, 2014, letter to Debra Myles, the Canadian Environmental Assessment Agency’s panel manager, Stephen Edwards, GCT Global Container Terminals’ CEO at the time, urged the panel to “undertake more market analysis regarding the suitability of the project.”

The letter noted the shift in the shipping industry to the consolidation of carriers into major alliances that deploy more mega-container vessels. GCT agreed with the container growth estimates used as a rationale for the project, but Edwards argued that “the manner in which this growth is brought to Canada will be different than assumed in existing plans.”

But Cliff Stewart, VFPA vice-president of infrastructure, said building Terminal 2 is the best option for handling the expected 3% to 4% annual growth in container traffic to B.C.’s West Coast. That increase, he said, will outstrip the port’s capacity by around 2025.

“When you look up and down the coast, there really aren’t any other places available.”

For example, he said expanding Deltaport would likely not be an environmentally permittable project because of its potential impact on the marine environment in what are highly productive intertidal flats.

Stewart added that expansion in Prince Rupert beyond DP World’s plans would be a non-starter because all of Rupert’s suitable port land has already been optioned for other projects.

“Currently we effectively have two operators in the port, and we have been told very clearly in discussing the future, particularly with shipping lines, that they would like to see a different operator for Terminal 2. Generally, I think it’s safe to say that competition is beneficial.”

While annual container traffic on Canada’s West Coast is forecast to grow to six million TEUs by 2025, that projection could be affected by a host of factors aside from global economic growth.

Atop that list: an accelerated migration of transpacific container cargo through the newly expanded Panama Canal to ports along the Gulf of Mexico and the eastern seaboard of the United States.

The US$1.6 billion project to raise the Bayonne Bridge in New York has also opened the way for larger container vessels to use more terminals in the New York-New Jersey area.

McKinsey & Co.’s Container Shipping: The Next 50 Years noted that new manufacturing technologies that make labour costs less relevant and shrink supply chains could generate a wave of “reshoring” and “nearshoring.”

Add in technology’s ability to miniaturize and reduce the size of products and the McKinsey report said growth in container trade will likely be slowed. (See “Trade Routes Redrawn” – page 1.)

Uncertainty over geopolitics and trade policy will also affect trade.

The United Nations’ Review of Maritime Transport 2017 lists the shift in the Chinese economy to domestic demand, the emerging protectionist trade direction of the United States and Brexit fallout among those uncertainties.

Walter Kemmsies, managing director and chief strategist for JLL Ports, Airports and Global Infrastructure, told Business in Vancouver that the rise of the Gulf Coast ports is the most critical of the five major disruptive port trends listed in JLL’s report.

He also noted that one of the main disadvantages for Canada’s West Coast ports compared with their American competitors is their distance from the growing population centres in the southern half of the United States.

However, container traffic continues to increase for Vancouver and Prince Rupert, which is one of North America’s fastest-growing container ports.

When Prince Rupert’s Fairview terminal opened for business in 2007 it serviced one shipping line and handled just over 16,000 TEUs; it now services seven shipping lines and handled close to 737,000 TEUs in 2016.

At the August 29 Fairview terminal expansion unveiling, CN president and CEO Luc Jobin called it one of the most important destinations on the CN line.

Other shipping lines are also bullish on Canada.

Wolfgang Schoch, managing director for Hapag-Lloyd Canada, a subsidiary of Hapag-Lloyd (ETR:HLAG), the world’s fifth-largest ocean container company, told Business in Vancouver that there is continued growth for Canada in the container cargo market.

“That’s why I think ports need to invest [in infrastructure], and I think that’s why [Terminal 2] is important to have.”

U.S. West Coast ports are banking heavily on a rising tide of cargo.

Capital project investments for Los Angeles-Long Beach over the next 10 years alone will be approximately US$5.6 billion.

In a 2012 report on Terminal 2, PoV examined several options to handle the projected tripling of container cargo through the port by 2030. They included expanding Burrard Inlet and Fraser Surrey Docks container terminals. However, the report cited a lack of available inner harbour land for expansion and inadequate Fraser River water depth as prohibitive constraints in PoV’s ability to service more and larger deep-sea container ships.

It therefore concluded that building a new terminal was the best option.

But road and rail congestion in Metro Vancouver raises significant concerns over the region’s ability to efficiently handle a major influx of containerized cargo carried in mega-container ships that can take up to five days to unload.

In an interview earlier this year, VFPA president and CEO Robin Silvester said road-rail capacity connecting container terminals to the continental market and de-bottlenecking road-rail intersections are critical for the port.

PoV, he said, will therefore be applying for investment allocated through the federal government’s $10 billion National Trade Corridors Fund for road and rail connections in the port.

“We have done a lot of work in the gateway here to prioritize where the next key projects are. We would hope to get a significant amount of investment from that fund and, as we did in the past, to leverage that with private-sector investment.”

Bob Landucci, president and CEO of Ashcroft Terminal, said Terminal 2 will be the port’s best container expansion option as long as “it’s tied into the bigger national picture: the maximization of the rail corridor and use of inland locations to lower costs and increase throughput.”

Landucci, whose company is B.C.’s biggest inland “dry port,” pointed out that rail access for container moves is key to marine terminal efficiency.

He added that Fraser River waterways could be used more efficiently, as could the abundance of industrial land available in B.C.’s Interior to build more inland and dry ports that will improve rail efficiency and cargo movement service in the province.

Without Terminal 2, Stewart said, Canada would forgo “the revenue for the cargo that we would handle for our southern neighbours.… Over the long term it would have a pretty significant negative consequence to Canada.

“The jobs impact for the project would mostly be in the region, but the jobs impact related to the exports would be all over the country.”